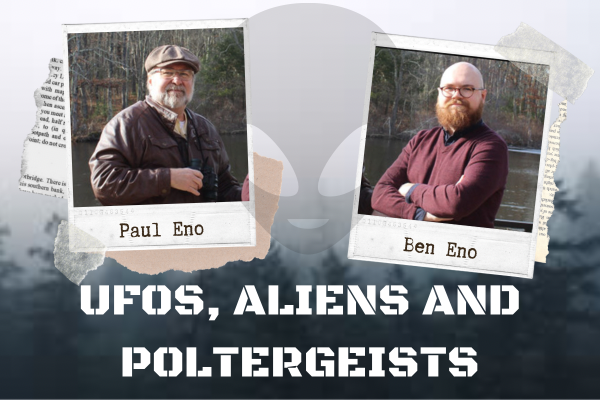 THIS IS A HYBRID EVENT (IN-PERSON AND VIA ZOOM)

Please Note: This is a hybrid program, you may attend in person at the Danbury Library or via Zoom. Participants will receive a link to the program via email once they have registered.

Due to unforeseen circumstances. This presentation will be pre-recorded and aired during the time slot. The presenters will not be at the Danbury Library, in person.

“Why is it that so many experiencers of alien abduction have poltergeist or other negative phenomena suddenly begin in their homes? Why do so many experiencers of ghostly phenomena suddenly start seeing UFOS? These “crossover phenomena” are now known and accepted among many UFO investigators, but they were well known to Paul Eno as early as the 1970s. Join Paul & Ben to look at the what, where, when and why of crossover phenomena from many cases over their combined nearly 70 years of paranormal adventuring.”

Paul is the author or co-author of more than 11 other books on paranormal and historical subjects. His latest title, Dancing Past the Graveyard: Poltergeists, Parasites, Parallel Worlds and God was released by Red Feather Books in 2019.

The father-son team has lectured all over America and in Europe, and has appeared on the Travel and History Channels, Coast to Coast AM and many other media.

Please be advised that the Library makes no warranties and/or representations concerning the virtual programs. Your decision to participate in the programs is an express consent on your part to waive any and all claims against the Library which may result from said participation and hereby release and discharge the City of Danbury / Danbury Public Library from any and all liabilities.

You must log in to register for this event.
Oops! - There was a problem in authenticating your card: